Why Learning a Language Isn't Hard
by Paul Pimsleur

What’s the hardest part of learning a foreign language?  According to Dr. Paul Pimsleur, it’s not pronunciation, and it’s not grammar ... it’s mastering vocabulary.  More than just recognizing or being able to remember words, it requires knowing the right way to put them together.  This “ear” for the language comes naturally in one’s native language.  We can hear it the minute a sentence is “off.”  Learning another languages’ natural rhythm is a level of mastery that develops over time, and it comes from conversing in that language – both speaking and listening.  Here’s Paul Pimsleur’s look at the elements that make up language proficiency:

Contrary to what most people believe, pronunciation is not the hardest feature of a language to master. Nor is grammar.

A language—any language—has three distinct components: pronunciation, grammar, and vocabulary. A closer look at these components will reveal that the third is the most difficult to master.

Pronunciation
Human beings are limited in the speech sounds they can produce. For one thing, all of us have the same vocal apparatus—tongue, lips, vocal cords, and so on—which we use in roughly similar ways.

Then, too, sounds must remain distinct from one another; if there were too many, listeners might have trouble distinguishing them. Linguists tell us that no known language is composed of fewer sounds than Hawaiian, which has fifteen, or more than certain languages of the Caucasus, which have up to sixty. Most languages fall somewhere between these two extremes; English and French, for example, have thirty-one sounds.

Fortunately for the learner, in most languages fewer than half a dozen sounds are difficult to imitate.  And within the first few weeks of study, this number typically dwindles to one or two.

One should always strive to achieve a native-like accent; this is part of the ambition to learn the language well. But we must concede that a person can thrive in a foreign country, converse freely, and even conduct business though his accent may be far from perfect.

Relatively speaking, pronunciation poses less of a learning challenge than grammar or vocabulary.

Languages exist so that human beings can communicate experience. Since all human beings share a common physiology and common basic needs, it is little wonder that all languages have certain features in common. English conveys the idea of going into a room by those three words, in that fixed order; Finnish conveys the same idea by a suffix, as if one were to say “roominto.” The point is that both languages have a way of conveying the “into” idea.

Similarly, all languages have devices for conveying whether an action is presently going on (she is dancing) or is finished (she danced); for relating people and things to each other (Jack’s wife; our car); for replacing a noun (the woman) by a pronoun (she).

Anthropologists working in the remotest corners of the world have been amazed to discover that all people, however “primitive” they may appear from our point of view, possess a language whose grammar is systematic, internally consistent, and well adapted to their life needs. There is no such thing as a primitive grammar.

An experienced language learner is one who knows approximately what to expect when he confronts the grammar of a new language. He knows that he will encounter both good and bad surprises. If he decides to study Finnish, for example, he will be delighted to find it has a very simple number system. (A friend of mine once learned the Finnish numbers from zero to infinity during a two-hour flight to Helsinki.) He will be dismayed to find it has a formidable variety of word-endings. But having learned other languages, he will be psychologically ready both to enjoy learning the numbers and to struggle with the word-endings. He has seen this sort of thing before and knows it can be mastered.

In learning grammar, we are buoyed up in moments of discouragement by knowing that the task is limited. If you take any language textbook and add up the space occupied by rules of grammar (distinct from exercises, readings, and other content), you will find it surprisingly compact. The basic grammar of a language can generally be explained, with copious examples, in fewer than one hundred pages.

This is not to suggest that the way to learn grammar is to memorize those one hundred pages. Some people do go about swallowing grammar whole that way, but for most of us there are more palatable methods. Whatever the method, however, one is bound to hit some snags along the way. The knowledge that there is only so much grammar, and no more, can help rekindle a person’s courage when a tough point of grammar makes the language seem impossible to master.

Vocabulary
Words, words, words. It takes about fifteen hundred of them for a “basic” command of a language and perhaps five thousand to be really fluent. This is a challenge to anyone’s learning ability, however gifted s/he may be. However, if a person can recognize some foreign words from his own language, or from a third language that he knows, the task will obviously be much simpler.

As a general rule, languages closely related to one’s own are easiest to learn, for one may find helpful similarities in pronunciation, one is likely to find them in grammar, and one is virtually sure to find them in vocabulary.

As native speakers of English, Americans are in a favorable position to learn foreign languages, for English is related to two important language families. We enjoy a head start whether we are learning a Romance language (French, Spanish, Italian, Portuguese, Romanian, and Catalan) or a Teutonic language (German, Dutch, Flemish, Afrikaans, Norwegian, Danish, Swedish, and Icelandic).

English is a Teutonic language. The early settlers of England were German-speaking tribes whose dialect gradually developed into a separate language. The affinities between German and English are still quite evident today.

French and English, on the other hand, were never one language. The Normans conquered England in 1066 and occupied it for some two hundred years, during which time the upper classes spoke only French, while the lower classes continued speaking English. In the years following the Norman Conquest, about ten thousand French words entered the English language. Some 75 percent of them are still in common use.

How your brain wants to learn a language.
At Pimsleur Language Programs we create programs that utilize Paul Pimsleur’s groundbreaking research. He believed that by creating a conversational framework using simple, useful words and sentences, learners could internalize the basic structures. Once that “scaffolding” is built, new vocabulary and more difficult combinations become easy to master – as simple as adding words in one’s native tongue.  And as if that weren’t enough, grammar and pronunciation are built in to every lesson, but because they’re integrated into every conversation, you’ll learn them effortlessly just by speaking and listening. 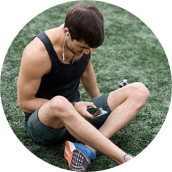 I am thrilled that I can actually communicate conversationally in Swahili and I'm only on Lesson 12! It works! ”
Ineqsunaq from North Carolina
​