Using Pimsleur as a Shortcut to Mastery
by Paul Pimsleur

Dr. Pimsleur’s Method uses a limited vocabulary to teach the structure and the common sounds of the language, and embedding cultural information and pronunciation practice into every lesson. By starting with Pimsleur, you get the core learning up front, which makes it easy to add new vocabulary and more complex structures, all while developing a real feel for the culture and people.  Pimsleur courses provide a context or a framework, which you then customize for your particular interest and need.

So ... How Long Does It Take to Learn a Language?

Some people would be very glad if they could say even a few phrases in a foreign language with a passable accent. Others mainly want to read great works of literature. Still others may aspire to speak and write another language as fluently as their mother tongue.

Before travel abroad became common, foreign languages were associated in this country with educated people and immigrants. The former were often interested only in reading and writing a particular language, while the latter could speak their native language but had little occasion to read or write it after coming to America. Some educated people resembled the upper-class British gentlemen of the nineteenth century who typically “knew” French but were disinclined to imitate the “peculiar” sounds a Frenchman makes when speaking. In today’s world, many people who study a foreign language chiefly desire to speak it. It is important, therefore, to estimate how well a person can expect to speak a language after studying it for a certain number of hours—and conversely, how many hours it may take him to reach the fluency he has in mind. Several estimates will follow on how long it takes to achieve various sorts of mastery, based on FSI data and my own research.

Many U.S. government agencies use the FSI Absolute Language Proficiency Ratings to measure a prospective employee’s ability to use a foreign language in his work. Once employed, he periodically undergoes the same type of rating as a basis for promotion.

The person to be rated is interviewed by one or more trained testers, who are always native speakers. They converse with him for ten to twenty minutes, probing his command of pronunciation, grammar, and vocabulary. Then they pool their judgments to assign him a rating. The lowest rating is 1; the highest 5; and any rating can be modified by a plus or minus.

Each rating designates a particular degree of mastery of the language for business and social purposes:

How long, one wonders, does it take a person to achieve the minimum 1, and how much longer after that to reach a 2 or 3?

FSI researchers studied the performance of all their students during a three-year period, noting the ratings they received after various periods of training. Table 1 shows the results for the “easy” languages, and for the “hard” languages.

In reality, these time estimates are a little lower than they at first appear; holidays and other lost time reduce them by about 10 percent. Nevertheless, the meaning is clear. If you are a language learner of average ability, and you undertake an “easy” language, it will probably take you about 220 hours to get to the first level of mastery in speaking it, and double that to get to Level 2. If you are slower than average at learning languages, allow 50 percent more time; if faster, 50 percent less.

These figures are based on a particular type of instruction: the FSI intensive course where one studies a language for six hours a day, five days a week, in a class of no more than ten students, led by an experienced linguist and well-trained native drillmaster. The school is a language learning paradise, the students are highly motivated, and optimum results are achieved. Yet these estimates are reasonably valid for people who, like most of us, have no choice but to attend a conventional course that meets forty-five minutes a day or a couple of evenings a week.

Human attention is limited. No one can absorb knowledge steadily for six hours a day, week after week; some of the time in intensive courses is necessarily “wasted” in relaxing, clearing one’s mind, or plain daydreaming. Moreover, things that seem confusing one day sometimes clear up by the next, after they have settled into place in one’s mind. This “incubation” factor favors a non-intensive learning schedule. In short, it is not certain that people who spread their language learning over a longer period necessarily require more total hours than those who concentrate. They may even require fewer.

The overriding message is that anyone can learn a foreign language, but some people are quicker at it than others. Still, language learning is a serious commitment, and if one’s aim is to speak it comfortably (say, 2+ on the FSI scale), this is likely to take the equivalent of six months of full-time study.

However, fluency in speaking is not everyone’s chief objective. An alternative objective, perhaps less demanding, may correspond to your needs and desires. 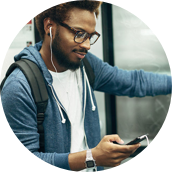 I tried Rosetta Stone and only the Pimsleur method allows you to really communicate with other people. ”
Ray from California
​